Abundo and Presens Impro present Comedy Bambi – an entirely new humor concept where famous stand-up comedians stand like fawn on slippery ice and do improv together with some of Sweden’s absolute best improvisors! Petter Bristav guests the premiere on December 11.

What do the stars Stephen Colbert, Ryan Reynolds, Will Ferrel, Tina Fey, Kristen Wiig, T.J. Miller and Maya Rudolph have in common?

Answer: They all have roots in Impro Comedy – and in Sweden, Presens Impro leads that style of humor.

Impro Comedy is the newest form of comedy from the USA. It involves completely improvised sketches which create a thrilling energy in the room that often makes the laughter more real than any other form of humor.

In the US, Impro Comedy is the hottest form of humor, both on the live scene and in podcast format. Comedy Bang Bang, Off Book: The Improvised Musical och Improv4Humans is leading, and soon, Sweden will also get its hands on a podcast of the same spirit!

Together with Presens Impro, we present COMEDY BAMBI – a live podcast where the genius of improv-comedy shines through. Welcome!

The improvisors are My Gudmundsdotter, Erik Broström, Amanda Lindmark and Elias Bjärgvide and tonight’s Bambi is comedian Petter Bristav.

Petter worked as a cloakroom attendant at Norra Brunn and was inspired by other comedians to enter the comedy business after some time.

Petter has worked on and produced the latest seasons of Släng dig i Brunnen, and has also worked on TV-productions such as Extra Extra, Roast på Berns, Cirkus Möller and Partaj as well as writing and editing sketches for SVT Humor.

We have a number of tickets for our Helio members – send an email to oskar.linse@abundolive.se and put “Helio member” in the subject bar and the tickets are yours!

The lecture will be held at the “Bond” auditorium, a lounge with comfortable cinema seats. Before and after the lecture, you can grab a bite to eat at the restaurant Penny & Bill or try one of the drinks at the mythical bar A Bar Called Gemma. 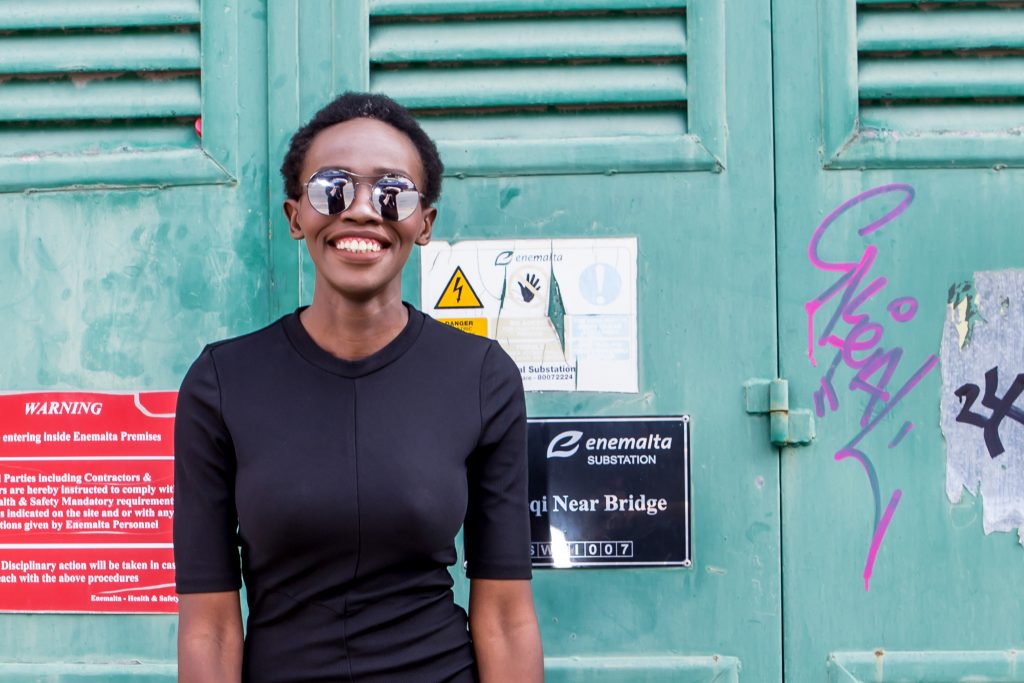 The problem with “soft values” – about the ability to choose and the motivation in practice  We are living in a time where soft values rule. Being able to choose for yourself, having maximum freedom of choice and acting out of our own inner motivation is considered the right way for both organizational success and … 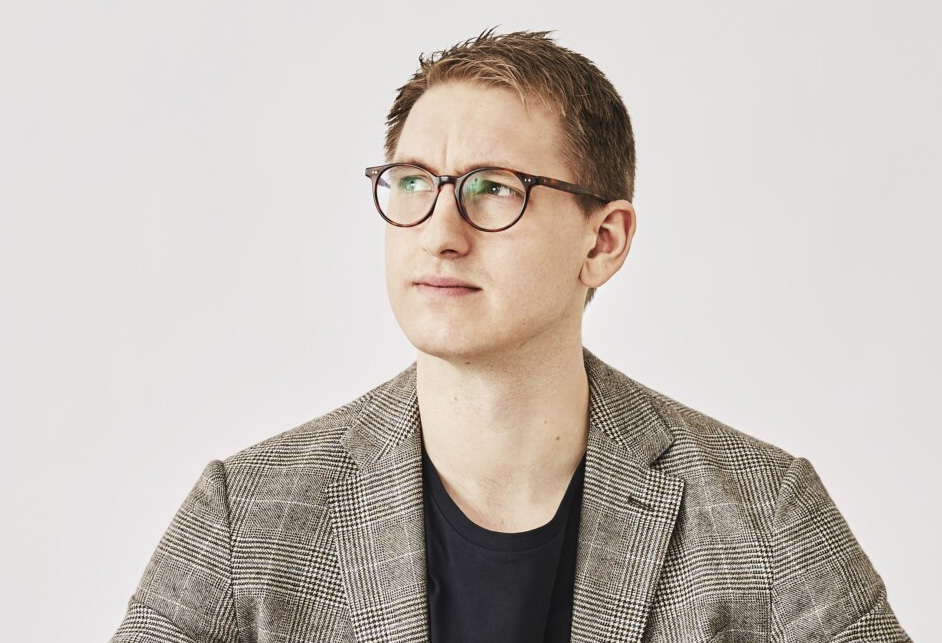 Have you grown tired of climate news? Or are you one of those that soak up all the reports surrounding global warming? It’s hard to know if you should get behind the optimists today or add yourself to the group of pessimists and start mourning our future generations. It’s impossible to know exactly where we … 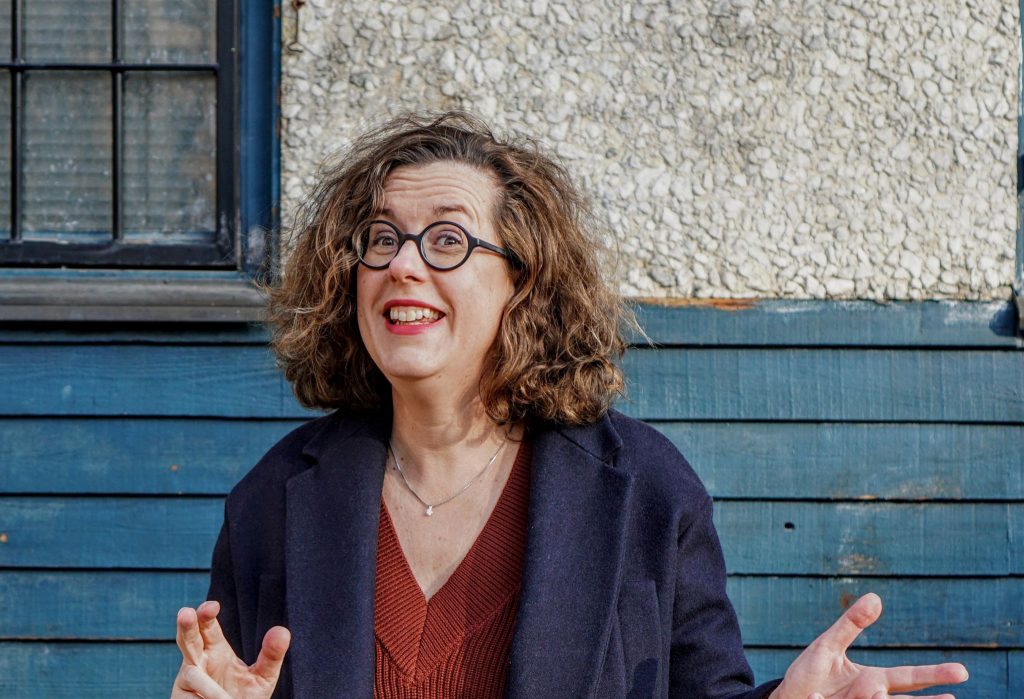 Time for some new shoes? The successful Swedish brand Myrqvist is bringing us samples and other goodies from the closet. You will find them at Grev Turegatan 26. First come, first serve! 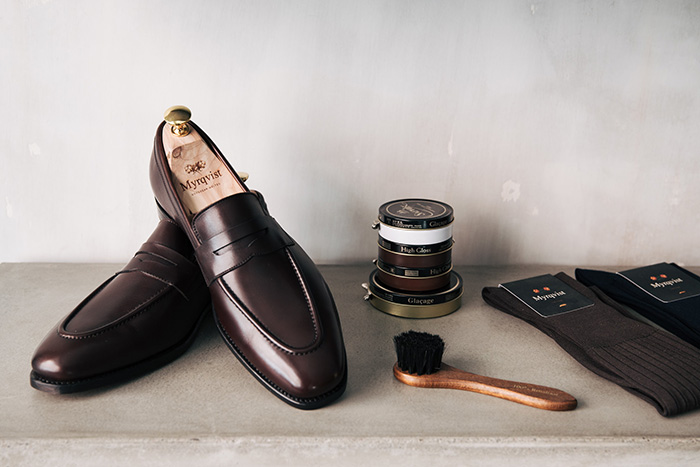 Since several years back, Helio and Gather are working together with a shared vision about creating a better city for everyone. The Gather festival is the innovation and inspirations festival that with its mix of speakers, topics and workshops can be seen as a Swedish version of SXSW. For 2020, there will be a new location for the festival, time of … 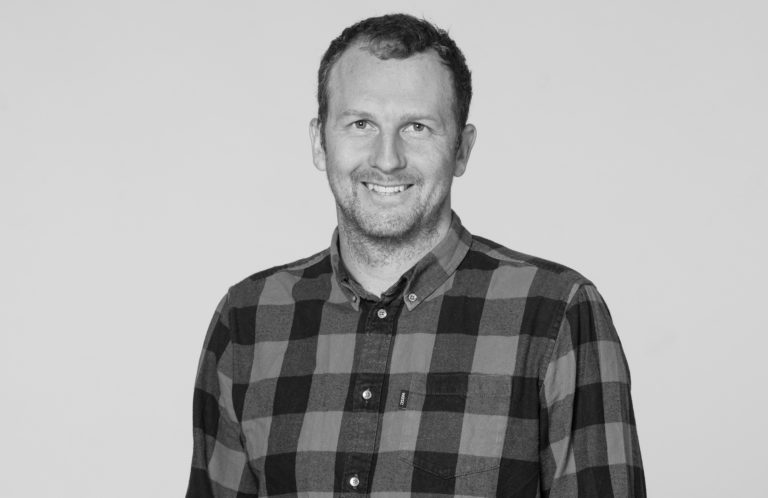 Trucks. It’s not something you think about every day. But maybe you should. Or you should at least reflect over how it is that all the food and the products that you consume has likely been transported to you with the help of a vehicle that A) releases huge amounts of carbon dioxide which adds totheclimate … 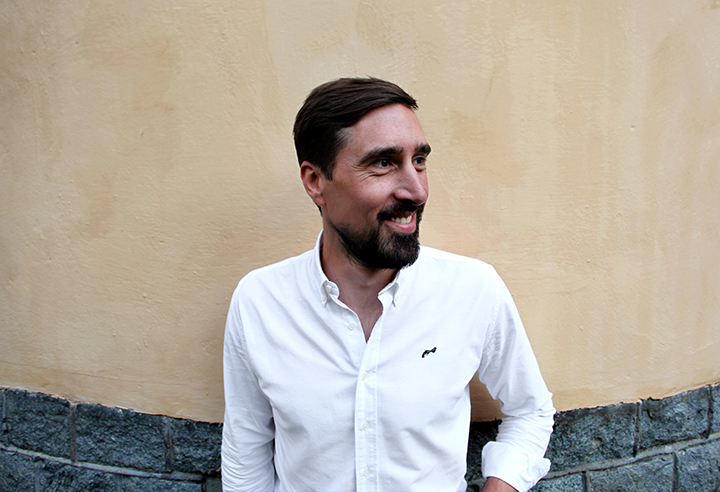 Beneath the hard shell of computers is where the magic happens, or to be correct: programming. You have probably already heard about this thing with ones and zeros and how they somehow go together with programming, but isn’t it about time that you learn how it actually works? The journalist Marie Birde and computer genius Olga Stern has, … 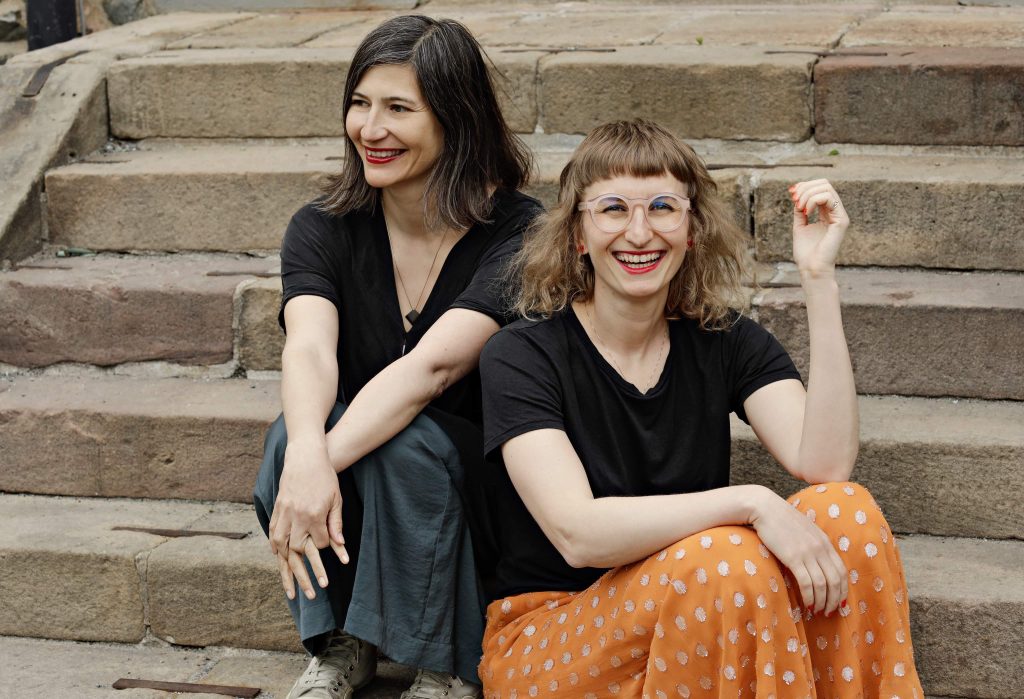 Each of us have been to a really good workshop at least once. Lots of energy, unexpected ideas and colleagues that prove to be smarter than we might have thought. But we also remember less fantastic workshops, where the participants most of all looked forward to lunch. What’s the real difference? Usually, it’s about engaging the participants, breaking routine and instilling the feeling that everyone … 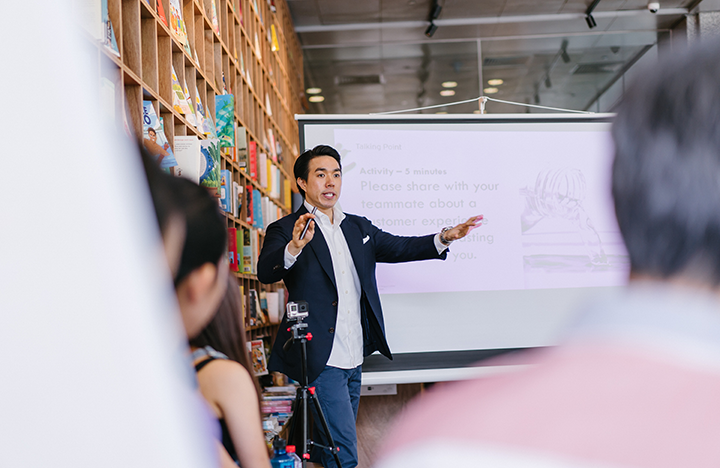 We once again have the joy of presenting an inspirational lecture with Christian von Essen! Christian’s lecture was previously loved by 90% of the audience and he received brilliant reviews. We have a limited number of tickets to this lecture – email robin.sjostrand@helio.se if you’re interested!  What do the experts really say about the future? This lecture mixes the development of … 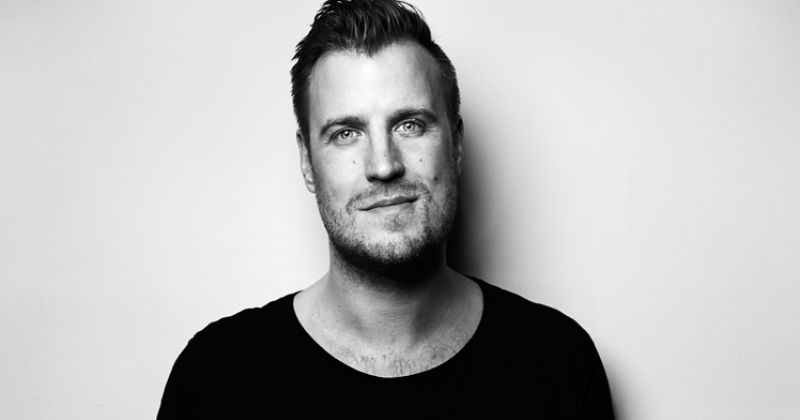 Christmas Coziness at Helio is as much of a tradition these days as Donald Duck and some relative wandering off and buying the newspaper is!   We meet to together, eat Christmasy things and drink Christmasy drinks in all shapes and forms – and as the cherry on top, we’ll do a quiz walk and a music quiz (Christmas-themed of course) with some nice prizes! But the … 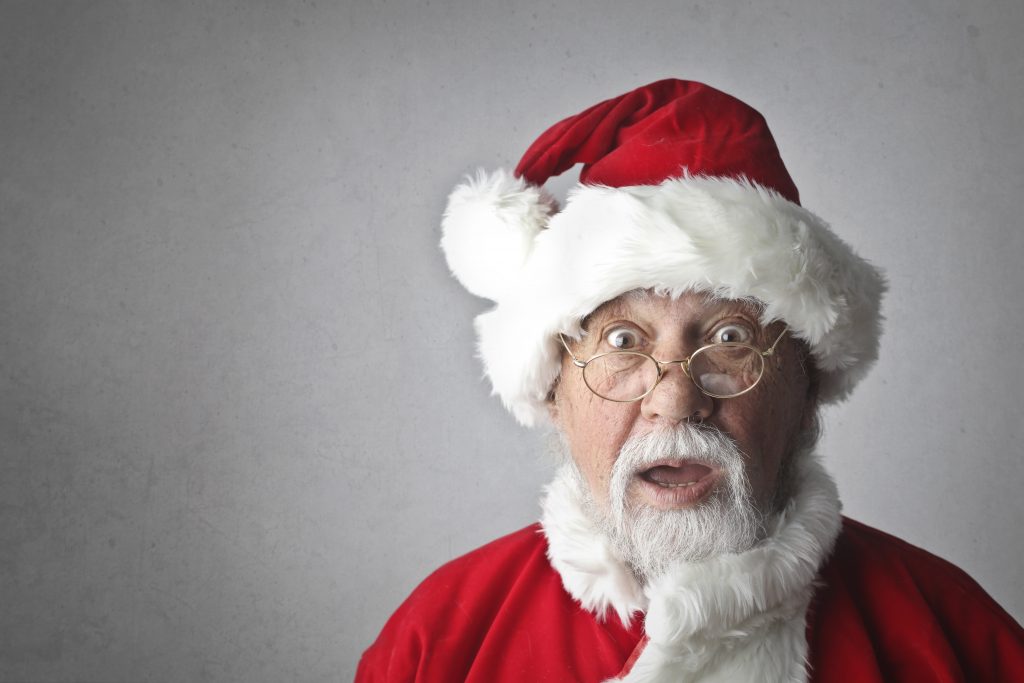 Those of us who live in the wealthy part of the world shop far too much. Both the environment and people in other countries suffer as a result. At the same time, many people are starting to feel tired of the fast fashion trend. A clothes-swap day is a fun, social and a completely free activity that is … 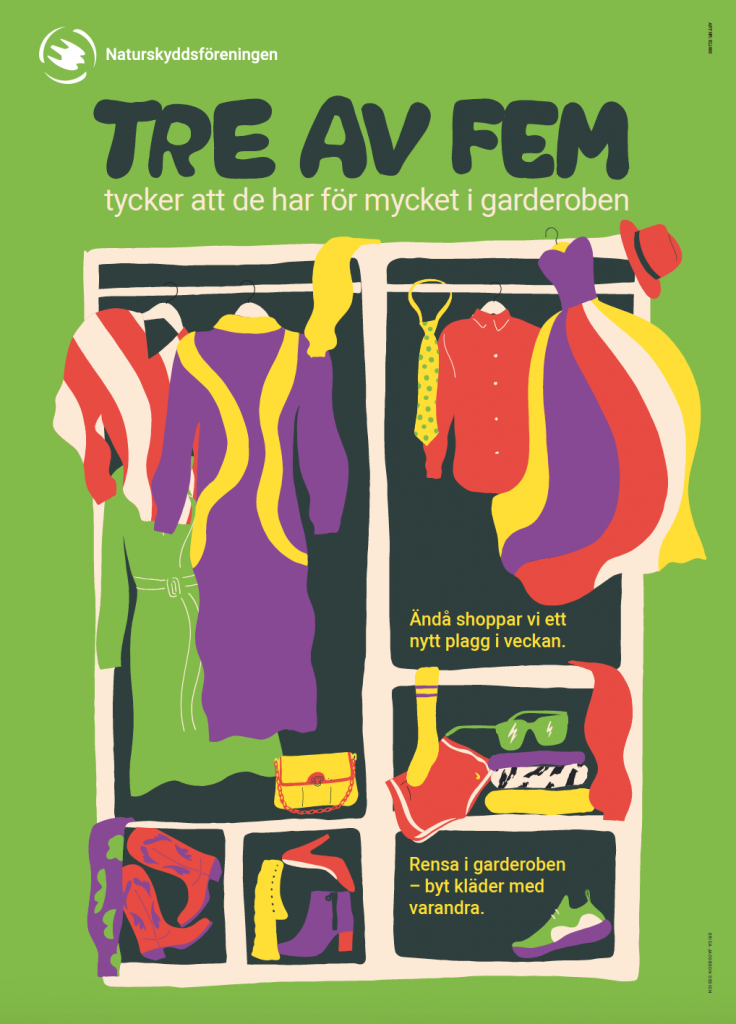 Alex Lindgren, born 1965, grew up in Gröna Lund – a family business for generations. Already as an eight-year-old, he would help out at the amusement park and as a 19-year-old, he became part of the board as Vice CEO. In 1992, he took control of the role of Operative in Chief for external events. Learn@Lunch is a lecture series specifically developed to … 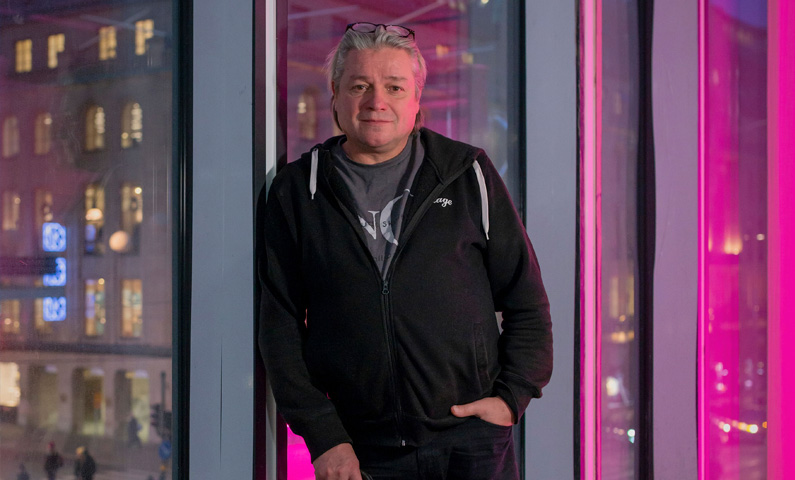 Abundo and Presens Impro present Comedy Bambi – an entirely new humor concept where famous stand-up comedians stand like fawn on slippery ice and do improv together with some of Sweden’s absolute best improvisors! Petter Bristav guests the premiere on December 11.    What do the stars Stephen Colbert, Ryan Reynolds, Will Ferrel, Tina Fey, Kristen Wiig, T.J. Miller and Maya Rudolph …

Scala Komedi is visiting Helio Hornstull and offering top class comedians!  Lineup: Thanos Fotas, Kirsty Armstrong, Melody Farshin, Christoffer Nyqvist. Of course, this is the perfect opportunity for an After Work with everything that that entails…. You can find the tickets here, but free VIP tickets will only be offered to the Helio members that are first to send an e-mail to our Head Curator martin.tallvid@helio.se You can find … 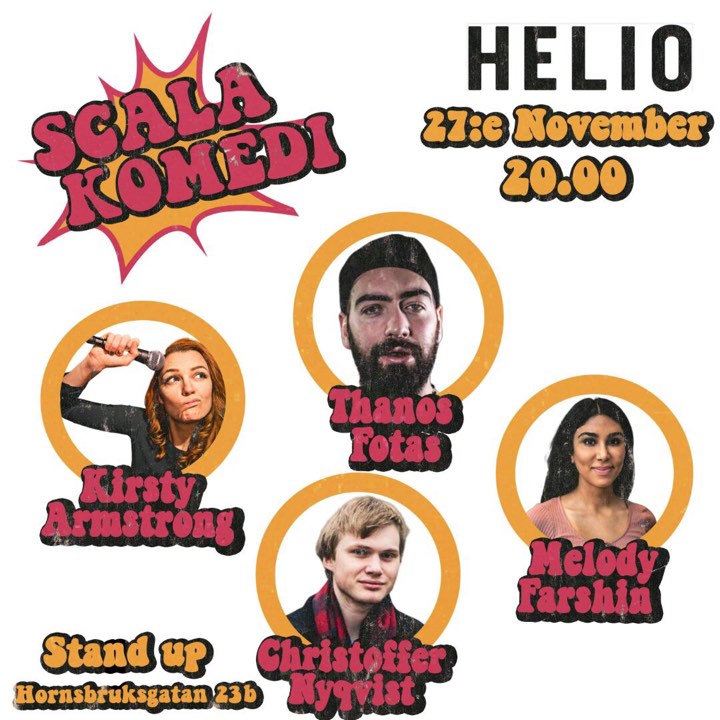 Abundo presents an inspirational lecture with Mi Ridell  How does our new digital existence affect our stone-age brains? Are we losing our ability to perceive body language, be creative and feel empathy for the benefit of smarter AI? Mi Ridell is a lecturer and expert within rhetoric and body language. Don’t miss this evening with exciting insights about body language … 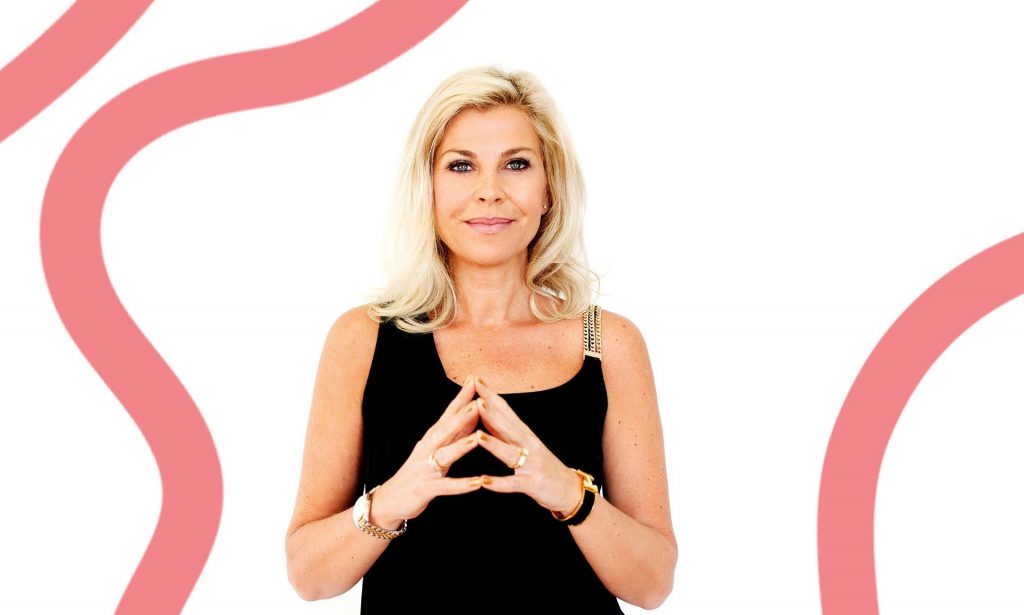 Do you remember the secret stash of Playboy-magazines in the forest?  Today, children have unlimited access to free pornography right in their pocket through their smartphones. According to research, internet porn contains physical aggression in up to 90% of all scenes. Experts are calling it our time’s biggest social experiment. So, what can we do? Learn@Lunch is our lecture series with the intention of stimulating and inspiring you while simultaneously filling your stomach. Since we all have time for lunch, we thought we would kill two birds with one stone and present relevant and current topics and questions, offer lunch – and learn something new every time. Porrfri Barndom is supplying parents and schools with knowledge and expert tips and is actively working to get politicians and operators to collaborate. “The impact of pornography on developing children could be the largest unregulated social experiment of all time” Michael Seto, forensic psychologist, scientist, sexologist and writer. As usual, we will offer you a delicious lunch while you are learning – RSVP here before December 2nd or send an e-mail to our Head Curator martin.tallvid@helio.se  where you are also welcome to recommend future speakers 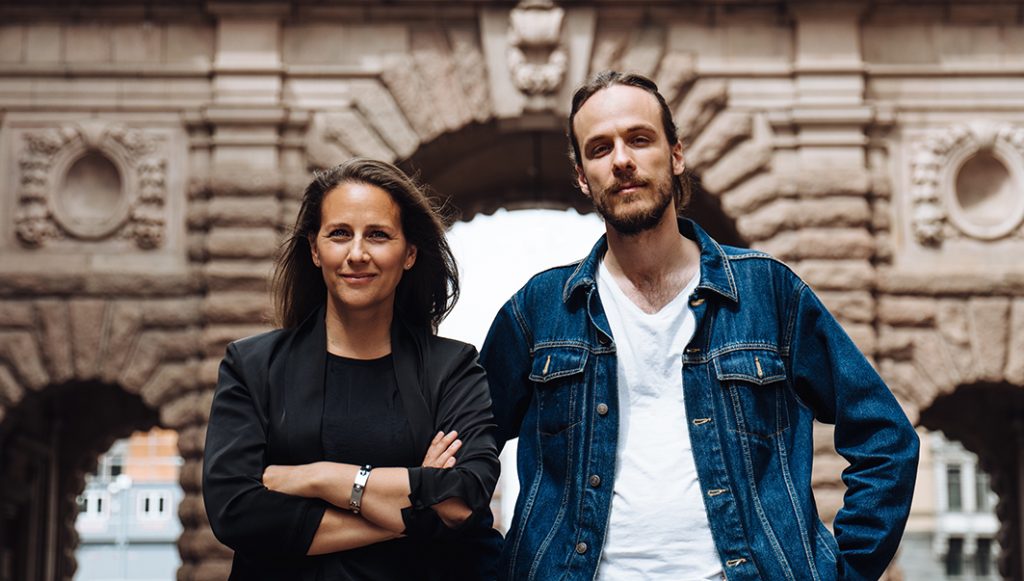 It’s that time of the year that you all have been waiting for! On December 6 Gather are launching the 2020 Gather experience at Helio GT30! Joins us for a morning session where we will let you know all about next year’s Gather. And don’t sleep on this.  Be the first to get to know … 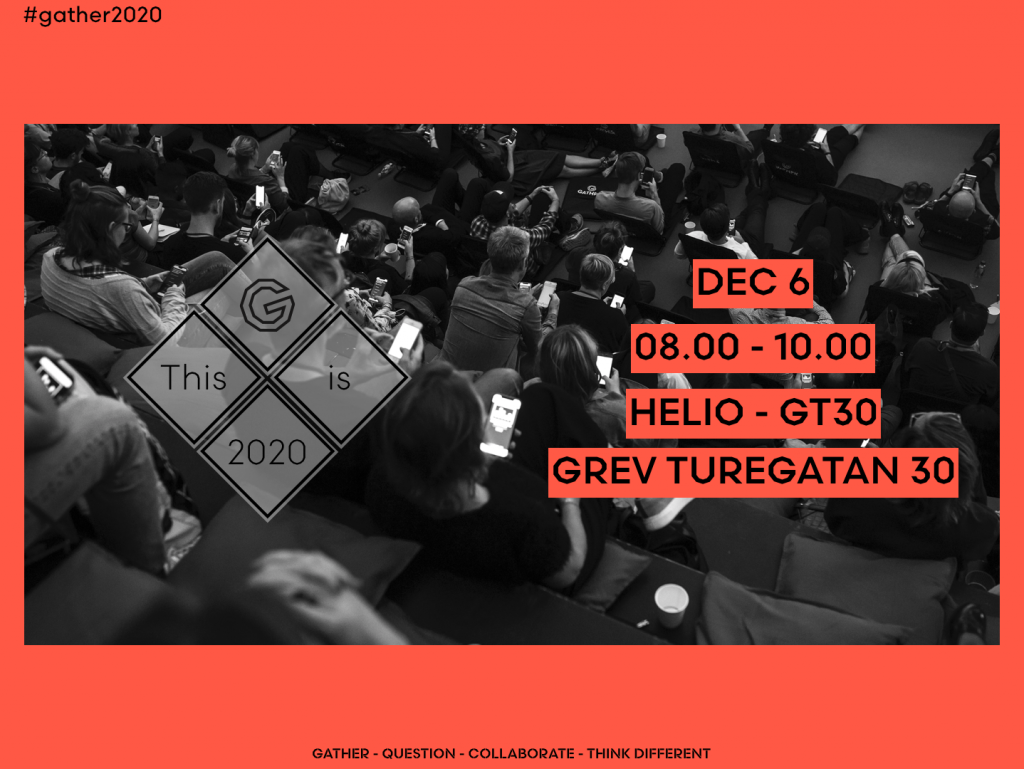 During 2019, Helio started a collaboration with BLING and the contest by För-Orten in order to strengthen the entrepreneurial force around Kista and other suburbs nearby. The goal is to help create new businesses that will in turn contribute to the development of Kista. This means that we will see plenty of new exciting ideas being born, and through the work of BLING, we will create better … 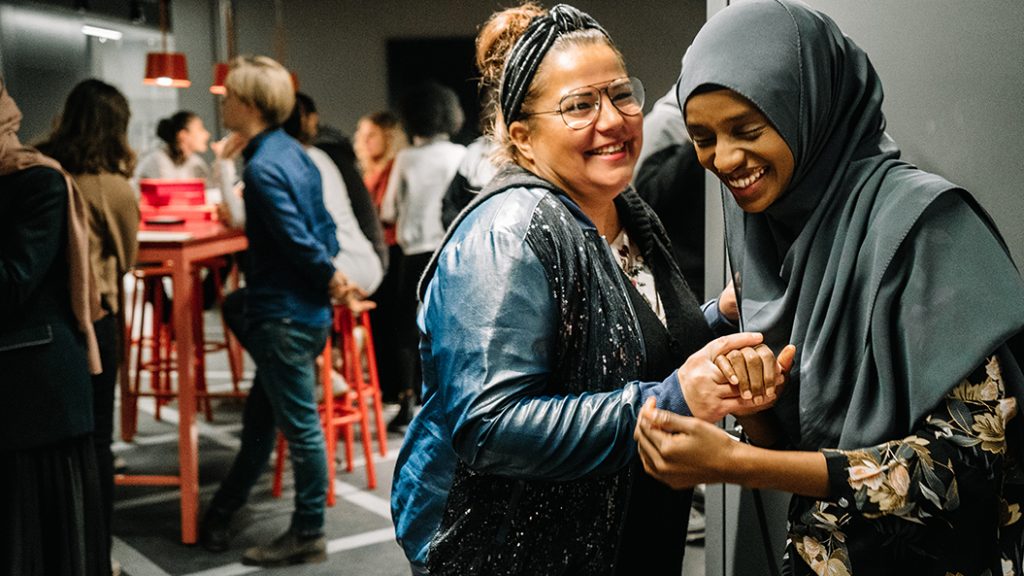 4 months of renovation, an enormous indoor tree and lots of new members that are ready to celebrate together with you a dark night in November. Best drinks from our members Brooklyn Brewery – Special appearance with Johan Evers from A Bar Called Gemma – Presentation of the mural painting/sculpture by Peter Jeppson – Fantastic food from our neighbors at Tjoget – DJ Karl Alley … 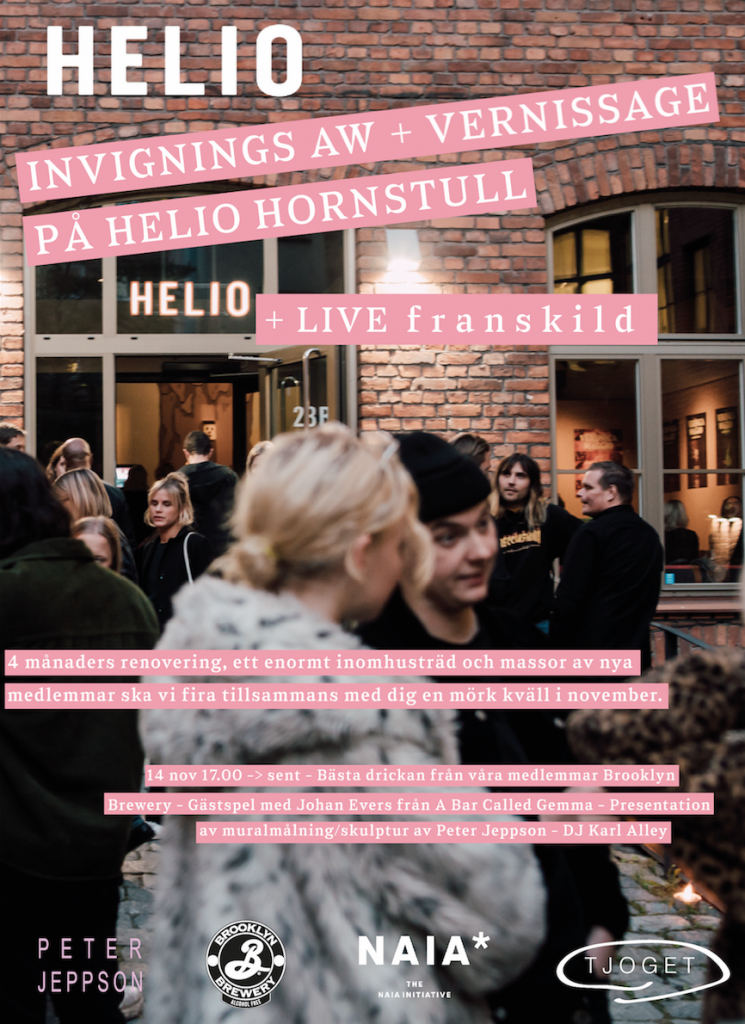 How you can strengthen your brand and increase sales even with small means.   Today we are constantly being exposed to new impressions daily. Everyone wants to be seen and heard at the same time – everyone keeps trying to talk over each other and we have lost the idea of what it’s really all about. It’s becoming increasingly more … 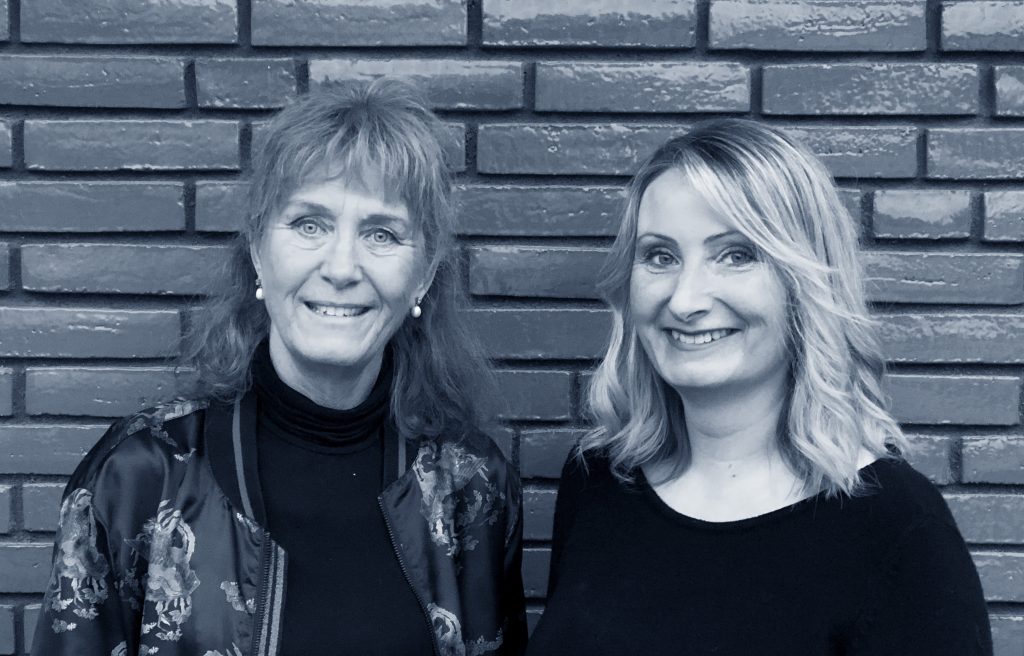